The Stuttering Bard of York The Stuttering Bard of York is a lighthearted tale of adventures and mishaps, starring a stuttering farmer who wants to be a bard, a warrior princess with a horse called Mankiller, and a pacifist wizard who isn’t very helpful when it comes to saving the world.

Ben Transom is a simple farmer who sings off-key to his horse and wishes he were a bard. But when a goblin raid from the Shiddow Mountains destroys Ben’s simple life, he is sent to petition the king for justice and is thrown into an adventure greater than he every dreamed.

Along the way, Ben meets the warrior-princess Jess and the pacifist wizard Ernie. Soon they learn that the evil wizard Rimmah has enslaved Jess’s parents and seeks to conquer the entire kingdom of Tarn, and Ben finds himself caught up in events more dangerous than he ever imagined. (Read more…)

The Stuttering Duke of York The Stuttering Duke of York is the sequel to The Stuttering Bard of York. Ben has a problem. No, he has more than one problem. The king and queen won’t allow their daughter, Mol’Jessel, to marry a man they see as a stuttering provincial idiot. Ben doesn’t help the situation when he confuses ballroom dancing with giving spin-a-rounds, and offers the most inappropriate bride price for the princess.

But if surviving the schemes of the king and queen weren’t enough, Ben has bigger problems. The great goblin chieftain Ugg-lukk plans to conquer the kingdom, and Ben’s home is in danger. The king and queen see the perfect opportunity to be rid of Ben forever, and the princess sees a chance for Ben to prove himself worthy. Ben finds himself in charge of the war with a pacifist wizard and a bard with delusions of grandeur as his only friends. Disaster piles upon disaster as they rush toward a battle for the kingdom that nobody is ready to face. (Read more…) 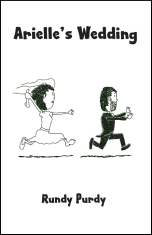 Arielle has met the man of her dreams, but will her dysfunctional cousin Rundy ruin the most special day of her life? Read this breath-taking story of adventure and romance to find out!

This illustrated story, full of light-hearted humor, brings to life the meaning of “family dysfunction” in hilarious style. Learn the true meaning of the Irish Shoe Dance, bedtime habits, and situational nose picking–all in the course of one wedding. (Read more…)