The Stuttering Duke of York

Ernie stopped in front of the inn, right in the middle of the road, and began hurriedly drawing various lines and diagrams in the dirt with his staff, muttering to himself. After several short minutes he paused and cocked his head, listening to the continuous goblin shriek, which was growing louder. “Oooh, I hope I get this right. I’m not very good at doing math under pressure.”

“What are you doing?” Jess snapped. “We need to be on the wall—now!”

“Math.” Ernie squinted at his lines in the dirt. “Constructing a shielding ward requires all sorts of math. You know, pi times the radius squared. A squared plus B squared equals C squared. Tangents, hypotenuses, and all the sort of stuff.”

“You lunatic!” Jess looked around wildly. “You can’t stop the goblins by scratching lines on the ground!”

Ernie squinted critically at his markings in the dirt. “I think that is the right number of decimal points. But maybe I should double-check my parallel lines.”

He glanced up at the walls, noticing the frightened crowd of villagers gathered on the walkway, staring transfixed at the charging horde. He licked his lips. “Eh. Perhaps I don’t have the time. We’re either cinders or saved, as my old applied mathematics professor used to say.”

Trouble in The Court

The Stuttering Duke of York is the sequel to The Stuttering Bard of York. Join Ben, Jess, and Ernie as they must face a great goblin chieftain and save York–along with all of the kingdom–from certain destruction. If saving the kingdom of Tarn from a goblin horde wasn’t hard enough, the court of Galdoron makes things even more difficult. 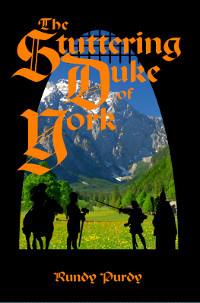 After killing the evil wizard Rimmah, Bennelzor Transom thinks all his troubles are over. But the king and queen won’t allow their daughter, Mol’Jessel, to marry a man they see as a stuttering provincial idiot. Ben doesn’t help the situation when he confuses ballroom dancing with giving spin-a-rounds, and offers the most inappropriate bride price for the princess.

If surviving the schemes of the king and queen weren’t enough, Ben has bigger problems. The great goblin chieftain Ugg-lukk plans to conquer the kingdom, and Ben’s home is in danger. The king and queen see the perfect opportunity to be rid of Ben forever, and the princess sees a chance for Ben to prove himself worthy. Ben finds himself in charge of the war with a pacifist wizard and a bard with delusions of grandeur as his only friends. Disaster piles upon disaster as they rush toward a battle for the kingdom that nobody is ready to face.

Interested? You can download a PDF copy of The Stuttering Bard of York. Remember to pass it around to all your friends.

You can purchase a good old fashioned copy of the book for yourself, or to give to someone else.